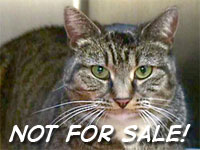 Internet auctioneer eBay have cancelled their plans to allow live pets to be sold on its Web site after receiving a barrage of complaints from users.

Thousands of irate emails headed eBay’s way after word got out that they were considering lifting their ban on trading live animals.

This would have been a turnaround from their long held policy of banning the sale of live animals (except fish and snails).

Over the weekend, an eBay manager posting on an online message board announced that eBay were planning on creating a separate classifieds category, which would feature free ads from animal shelters and paid ads from breeders.

This prompted a torrent of over 2,000 emails, most of which were deeply unchuffed with the proposal, insisting that the ban should remain in place

As company spokesman Hani Durzy explained, users were concerned that the listings would encourage unsanitary ‘puppy mills’, where animals are sometimes bred in less-than ideal conditions, and that it might prove difficult working out legitimate animal shelters and the get-rich-quick scamsters.

There was also concern that people might start to breeding dogs to sell for fighting.

“The feedback was pretty overwhelming,” Durzy admitted, adding, “Farms and for-profit commercial breeders wasn’t something that they wanted to see.”