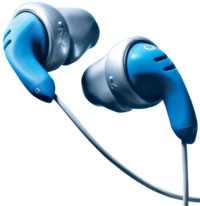 In-ear headphones (“earbuds”) like those sold with the iPod and other music players can increase the risk of hearing loss, according to a US audiologist (a what?!)

Research undertaken by Dean Garstecki of Northwestern University has found that that an increasing number of young people were now experiencing the kind of hearing loss found in aging adults.

According to Garstecki, cheap earbud headphones were more likely to increase the risk of hearing loss than old-school ‘over the ear’ headphones like the Grado SR60.

Garstecki’s studies found that MP3 users often crank the volume up to 110 to 120 decibels – enough to cause hearing loss after about an hour of listening.

The problem is worse for earbud wearers because the sound source is placed directly into the ear, boosting the sound signal by as much as six to nine decibels – the difference in intensity between the sound made by a vacuum cleaner and the sound of a motorcycle engine according to Garstecki.

We can certainly verify that some folks seem oblivious to the risk, blasting their music so high that we can hear the annoying “tssk chk tssk chk” leaking from in-ear phones over the thunderous rattle of a tube train.

The risk is exasperated by the bigger storage capacities and increased battery life of today’s MP3 players, encouraging users to keep on listening for longer periods.

Like a next door neighbour banging on the wall, Garstecki advises MP3 listeners to “turn it down!”, adding, “if music listeners are willing to turn the volume down further still and use different headphones, they can increase the amount of time that they can safely listen.”

Noise-cancelling headphones are also seen as a better choice because they reduce background noise but their added bulk and increased expense is likely to limit adoption.

Garstecki proposes the 60%/60 minute rule as a solution – this involves listening to an MP3 device for no longer than about an hour a day and at levels below 60% of maximum volume.

“If music listeners are willing to turn the volume down further still and use different headphones, they can increase the amount of time that they can safely listen,” commented Garstecki.

While we share Garstecki’s health concerns, we’re not sure how effective a campaign along the lines of, “Turn it down! Play less music!” is likely to have with the wired generation walking about with thousands of songs in their pocket.