All too often articles about the things teenagers are interested in are written by people old enough to be their parents and teenagers thinking isn’t represented. Lawrence Dudley gives you a point of view that you won’t find in other publications. You see Lawrence _is_ a teenager. 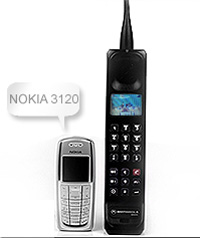 A Whole New Meaning To Retro
As a teenager, retro is your dad when he insists on playing his absolutely appalling Cher records. Not that my dad listens to Cher, of course, unless he only does that in secret, which I wouldn’t blame him for. Anyway, so retro is anything but cool as a teenager. In fact, most people my age that I know are very technology-conscious, and new phones, games etc. are common playground talk. What isn’t talked about is all that old stuff that dad’s seem to always talk about. You can imagine then that I almost choked when I read about people in China hacking old Motorola DynaTAC 8000x phones to feature colour screens and GSM-compatibility.

The 8000x was one of the first mobile phones around, and had quite an impressive feature set: A whole 30 minutes of talk time and 8 hours of standby along with a price tag of $4,000. They’re also the size of a house brick. Why on earth then are the chinese fitting these antiquities with colour screens? Well… The original Engadget entry for the story had a link to the original article, sadly for us, it was in Chinese. Using the Babelfish translation engine, I gleaned a vital piece of information from the nonsense-filled, automatically translated page. The following quote surely explains everything: “However, everybody could not forget it the standard use: Defends self the person!”. 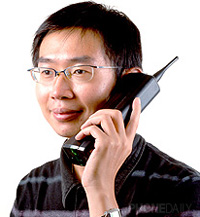 Ah ha! So that’s it: These “mobile phones” are actually weapons. Guess that means the end of taking my phone on the plane then! Still… The smiling Chinese man talking on his glorified, colour LCD display-equipped brick does look so innocent!

While this article is not intended to be taken entirely seriously, it does highlight the weirdness of some of the stuff people do and how stuff like that spreads as a result of the Internet.

While I accept that some strange people might want their phone to look like a car battery with buttons, I can only hope that no-one attempts to resurrect Cher, because let’s face it: There’s no reason to.

Ed: We’ve got a few of the old Motorola Bricks around the Digital-Lifestyles office, that we picked up at DefCon seven years ago. We’d love to them converted for current use. But then again, we some of us remember them the first time around.