Sony continues to build on the success of its ultra-slim DSC-T digital still camera range with the release of the six megapixel Cyber-shot DSC-T9 model.

Following in the footsteps of the T3, T5 and T7 models, Sony’s new mini-snapper manages to add optical image stabilisation and high light sensitivity, with the company claiming pictures with “significantly less blur and graininess than typical point-and-shoot cameras.”

The camera shoehorns a smarty-pants lens-shift optical image stabiliser that does it stuff courtesy of two gyro-sensors which detect hand movement and automatically calculate the necessary compensation for a crisp image.

The increased high light sensitivity (64 up to IS0 640) allows punters to grab flash-free, atmospheric shots in low light, although we’ve yet to see how effective Sony have been in keeping the inevitable noise down at high ISO ratings.

“Now the use of this category of cameras is pervasive. With the DSC-T9, we are taking this category a step further by incorporating advanced imaging technologies that ensure that you get the shot, even in unfavourable light conditions, like nightclubs and restaurants,” he added.

As with previous DSC-T models, there’s a whopping great 2.5-inch 230k LCD dominating the rear of the camera, with four playback ‘themes’ letting users display their photos with dynamic transitions shuffling along to user-selected music clips.

The Lilliputian shooter comes with a 3x (38-114mm ) Carl Zeiss Vario-Tessar folded-path optical zoom so there’s no whirring lens thrusting out of the camera on start up. 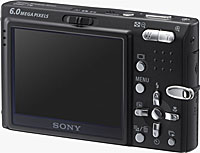 Turning the camera on and off is a matter of sliding the camera lens cover, with Sony claiming a battery life of up to 240 shots per charge – an improvement on the fairly dire performance of its predecessor.