As part of their strategy to achieve an “iconic image” for the brand, the Korean electronics giants said that it will be placing its SGH-i300 music phone into BMW’s series 5 models.

BMW drivers will be able to link the phone to the iDrive control interface, which features a control knob at the centre of the vehicle’s console, allowing access to various functions displayed on the in-dash monitor.

We’re not sure yet if the iDrive will just control the SGH-i300 MP3 playback or if it will also integrate communication functions too.

Back in September, we reported that Bang and Olufsen were joining up with Samsung to make a posh phone for folks with more money than sense with the resulting – and somewhat bonkers – ‘Samsung Serene’ phone expected sometime during Q4 2005. 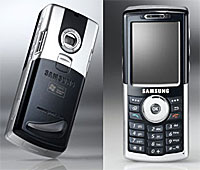 Samsung have already been poking their dipstick into the field of mobile-to-car technology, announcing a partnership with Audi back in July.