According to the latest figures from the International Telecommunication Union (ITU) in Geneva, Italy can now boast the highest mobile penetration rate in Europe, with mobile-mad Italians notching up 109.42 phones per 100 inhabitants.

The data comes from an ITU report scheduled for presentation next month but leaked by the Italian newspaper Corriere della Sera over the weekend.

The figures in the report reveal that, globally, only Hong Kong has a higherpenetration rate than Italy – 114.5% – but Italy wins in absolute terms with as many as 62.7 million mobile users. 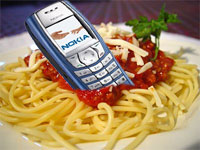 With over four million UMTS users, Italians are also leading the way in 3G take up, with the ITU reporting that the country is the most prominent user of 3G services in Europe.

Globally, the country slips to twelfth place in terms of 3G penetration, out of 70 countries that have introduced services.

ITU’s Cristina Bueti elaborating on the criteria used for their data in the newspaper, explaining that the figures referred to the number of activated SIM cards in use, rather than the actual number of phones.

Several countries have also quibbled about the methods used, including Luxembourg who reckon that the Italy’s figures are inflated because many Italians use more than one SIM on the same mobile phone.

Mind you, it could be argued that Luxembourg’s high mobile ownership is equally skewed due to their nationals living in neighbouring countries needing a second handset for use within its borders.

In May this year, research firm Analysys predicted that overall mobile penetration in Western Europe would 100 per cent by 2007, with the UK reaching 101% last year.