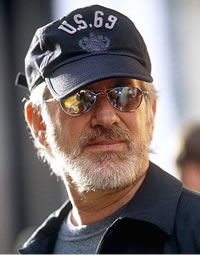 The world of film and video games come ever closer as Electronic Arts (EA) team up with Steven Spielberg to develop three original video games.

This isn’t a simple ET, the video game idea. Spielberg (and his team we suspect) will be sitting down with EA in their LA offices, hammering out completely new titles, directly working on concept, design, story and artistic visualisation.

Terms aren’t divulged, but we hate to think how much The Spielberg will be pocketing for this privilege.

We’re sure the possibility of this has no bearing on the The Spiels’ flattery of EA, “I have been playing EA games for years and have watched them master the interactive format.” it’s true, they do have a seemingly never ending flow of polished titles jumping on to the market.

The mutual-appreciation society didn’t break up there. EA Chairman and CEO Larry Probst, went on, “There is no greater storyteller than Steven Spielberg. In addition to his gift for pleasing movie audiences, he has an innate understanding of games and how to immerse players into a fantastic world of action and characters.”

EA has been, how shall we say, “inspired”, heavily by The S before, as anyone who’s ever played the opening scene of the first Medal of Honor, and heard of a film called Saving Private Ryan may have noticed.

In this crazy, lawyer-driven business world, some are wondering if the similarity was the basis for the start of discussions – rather than sue the pants off us, why don’t we do a multi-game deal? No … that would never happen, would it?

We’ve said it before, and we’ll keep saying it until it becomes true – once video games develop depth of personality and back story for its characters, TV and film is in serious trouble. Why would you want to just watch a film, when you can be in it?

King S clearly thinks the possibility of this is drawing closer. Well done to EA for snagging him.