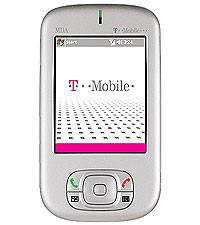 T-Mobile have launched ‘Web’n’walk’, their mass-market mobile Internet service, and are confidently predicting that it expects to lure hundreds of thousands of customers onto the service over the next couple of years.

Cocking a snoot at the punter-displeasing “walled garden” restrictions of rival operators like Vodafone and 3, T-Mobile’s new service allows users to browse the full Internet on their phones.

UK Managing Director Brian McBride was clearly enthusiastic about the idea: “We’re all about the full Internet, not quasi Internet…not a walled garden. We kick off with (search engine) Google on your front page, click one button and you’re away,” he told a conference call with journalists.

Conceding that Internet services on mobile devices to date had so far been, well, rubbish, McBride bigged up T-Mobile’s approach for fast, simple and affordable services and products, saying that mobile networks will eventually carry more Internet traffic than fixed-line computers or phones.

Unlike most network providers who target mobile Internet devices at the swivel-action executive mob, T-Mobile are one of the few focusing on regular punters who are keen to take advantage of all the fancy gizmos on their Internet-enabled handsets.

“Web’n’walk redefines internet on mobile,” insisted T-Mobile chief executive Rene Obermann in a statement. “The comparison is no longer with other mobile internet services. It is with fixed line Internet.”

T-Mobile’s Web service will be available in the UK on products including the MDA range, the new Nokia N70 and N6630 handsets and Sidekick II.