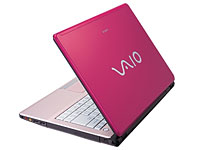 Fashion aficionados concerned that the hue of their laptop may clash awfully with their high fashion clobber will be delighted to learn that Sony is releasing their Sony F-type laptops in four stylish colours.

With Sony offering the laptops in white, pink, green and blue, fears of a haute couture faux-pas should be banished forever, although uptight Daddy-o’s can still purchase the laptop in sensible, corporate silver.

Measuring 14.3-inches wide, 10.4-deep, and just 1 inch-thick, Sony’s engineers have managed to wedge in a 100GB drive, dual-layer DVD±R/RW/RAM and a Webcam for showing your friends your latest Pierre Cardin outfit. 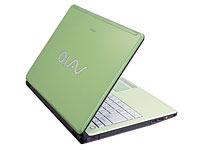 The display panel is a mere slip of a thing at 4.5mm thick with the designers waxing lyrical about the “sapphire black and platinum white” finish. 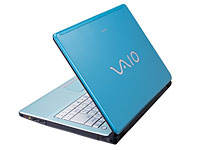 The Vaio TX series offer a handy AV mode button which makes the machine available for watching movies or listening to music in just 12 seconds with no need to boot up Windows.

The claimed battery life is impressive – up to 9 hours and 14-15 hours with an extended battery.

We’ve no idea of the price yet and – yes, you’ve guessed it – it’s only being released in Korea for the time being.