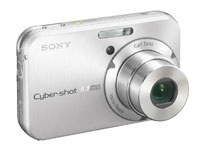 Sony’s new digital compact camera, the DSC-N1, cunningly attempts to combine the functions of a digital camera with a ‘pocket viewer’.

Sporting a gargantuan 3.0 inch, 230k touch screen LCD, the camera’s display is designed to act as both camera control and photo viewer, with a wide viewing angle making it easier to show off photos to gangs of chums.

Based on the software first seen in the innovative Cybershot M2 stills and video camera, the DSC-N1 records and internally stores up to 500 VGA (640×480) copies of every image taken on the camera.

These low resolution photos stay on the camera after the full size images have been transferred, so folks can carry a personal photo album around with their camera. 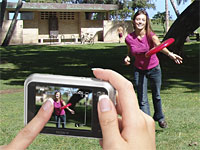 Stored images can be played back individually or as a slideshow, complete with options to add transitions, pans, wipes, fades and zooms, cheesy themes and background music.

For compulsive dabblers, the DSC-N1 also comes with a paint function letting users draw symbols or words on photos onscreen using their finger or supplied stylus.

“Since the introduction of compact cameras with large LCDs, consumers have increasingly been using their cameras to not only capture moments, but also share and show them immediately on the LCD screens,” said James Neal, director of digital imaging products at Sony Electronics. 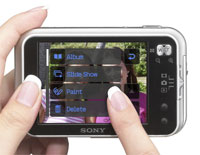 “The combination of these functions makes the N1 ‘more than just a camera’, because it takes sharing to a whole new level.”

The slimline (22.7mm) DSC-N1 is aimed at the point’n’shoot crowd, with eight pre-set Scene Selection modes, including Twilight, Snow and Beach functions as well as a few limited manual controls.

Although the camera can only record stills in JPEG format, dpreview.com reports that it is the first camera to feature ‘Clear RAW NR’, a process which appears to carry out noise reduction on the RAW data before it is converted to JPEG.