British airline bmi and TAP Air Portugal have announced that they will be allowing passengers to use their own cellphones on commercial flights within western Europe from late next year.

The two European airlines will be introducing OnAir’s voice and text service for mobile phones in separate three-month trial runs.

The trials will give OnAir, a Geneva-based joint venture of Airbus and Netherlands-based technology company Sita Information Networking Computing, the chance to assess its service before a general release slated for 2007.

“With both airlines, initially there will be a couple of airplanes – two or three airplanes – equipped with this system,” OnAir’s chief executive George Cooper told The Associated Press. 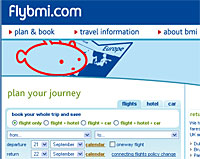 “During that three months, we’ll all be evaluating how it’s going, what the usage is, how we handle the crew issues and so on,” he added.

The system will be used by TAP on its Airbus 321 model and by bmi on its Airbus 320s, with passengers able to make and receive calls using a base station within the airplane once it reaches 3,000m

“This trial will guide us on usage patterns and some of the social issues in using mobile phones on aircraft,” said bmi chief executive Nigel Turner. “It will also help us to confirm the business case for rolling the service out across the remainder of the fleet.”

There have been concerns that cellphones trying to connect to terrestrial networks might interfere with a plane’s navigation, but OnAir’s plane-based system ensures that cellphones and other devices operate at lower transmission power and thus avoid affecting avionics.

The company is also looking to sell its services to other airlines and hopes to clear regulatory hurdles for air traffic within Europe some time next year.

BMI chief executive Nigel Turner was enthusiastic about the new service, “Our research tells us that our premium passengers have two key concerns: getting quickly through the airport, and the ability to carry on working during their journey.”

“This trial will guide us on usage patterns and some of the social issues in using mobile phones on aircraft, and will help us to confirm the business case for rolling the service out across the remainder of the fleet,” he added.

Much as we love the idea of firing off texts while we’re quaffing champagne at 20,000 feet and chatting to earthbound chums, it’s worth pointing out that the demand for in-flight mobile calls hasn’t matched expectations.

In a recent poll by IDC, only 11 percent of its 50,000 survey respondents wanted the ban on using mobile phones on planes lifted.