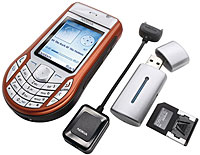 Acting like they’re fearful of not appearing hip to the mobile music revolution, Nokia have added their own rival to the Apple/Motorola ROKR and Sony Walkman phones, a special edition of the highly rated Nokia 6630 – despite having had music-playing on their phones for yonks.

The updated music player bundles in a 256mb RS-MMC (with memory card support up to 1 gig), which Nokia claims will hold up to 15CDs of music, giving it an edge over the 100 iTunes song limit on the Motorola ROKR.

Music can be transferred to the phone using the included Nokia PC Suite software or with the bundled Nokia USB MMC/SD reader, with the Nokia Audio Adapter letting users plug in their favourite headphones (or “cans” if you’re a DJ) into the standard 3.5 mm stereo jack.

“You can carry a good portion of your music collection with you wherever you go and with the Nokia Audio Adapter, you can quickly connect your favourite set of music headphones,” Tuula added.

Being based on the well-rated Nokia 6630, the phone also includes a 1.3 megapixel camera, mobile broadband access with WCDMA networks, mobile email and streaming video.

The only question we’ve got – is where’s the Nokia N91 we got excited about last month?