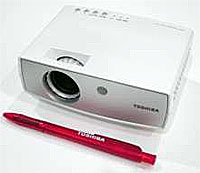 Toshiba’s new bijou baby has an unusual twist -the projector can be used to connect to 3G multimedia handsets, making it ideal for execs who want to travel light (and for those who want to share their text messages with the world).

The cool-running LED technology means that there’s no need to fit the thing with both a lamp and a colour wheel – and with a lot less heat generated, there’s no need for a noisy, dust generating fan. 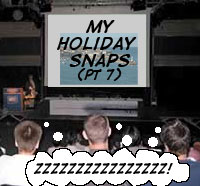 Inside there’s a panel fitted with different coloured LEDs which serve both as the light source and the means to determine the colour of the projected images.

With portability in mind, the unit is fitted with a 250-gram battery which can run for two hours and recharge fully in three hours, according to the company’s figures.

The projector is scheduled to be available by the end of the year, with a recommended retail price of approximately 999 euros (£675, $1,250). Not likely to be a big seller at that price is it?