With Sony and Toshiba still enjoying a schoolyard scrap over which of their rival formats should become the standard format for next-generation DVDs, Samsung have announced a nifty compromise that plays both formats.

With the ghost of Betamax still casting long shadows over weary consumers, Samsung have decided to soothe buyer indecision by offering a player that supports both Sony’s Blu-Ray Disc and Toshiba’s HD DVD standards.

In an interview in the Financial Times Deutschland, Samsung’s consumer electronics big cheese, Choi Gee-Sung, announced that the machine will launch sometime next year.

“We would welcome a unified standard but if this doesn’t come, which looks likely, we’ll bring a unified solution to market,” he said.

“It won’t be simple but you’ll see our solution in the coming year. Consumers will be too confused otherwise,” he added.

The bun fight between the two next-gen DVD camps has been dragging on for what feels like an eternity, with initial hopes of an agreement in April 2005 falling apart by August.

All this faffing about with different formats is sure to hold back punters who don’t fancy being lumbered with this year’s Sinclair C5, but pundits are hopeful that dual-play machines could prove the key to breaking the deadlock. 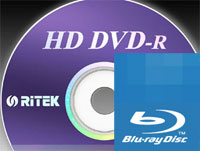 Although both Blu-Ray and HD DVD use groovy blue laser light to dramatically increase the storage capacity of a DVD-sized optical disc, they work in completely different ways.

The two formats employ different capacities, optical specifications and file structures, so Samsung’s new dual-format player will have to supplement its red laser (for current CDs/DVDs) with at least two other read heads for the blue-laser discs.

All that extra electronic wizardry suggests that their combo player is not going to be cheap, potentially putting off consumers wooed by the prospect of future-proof compatibility.

All of which adds to the industry pressure for stubborn Sony and tenacious Toshiba to sort out their differences in double quick time.