The result of collaboration with Intel, the Philips media centre is based around an Intel Pentium 4 processor running at 3 GHz atop an Intel 945 chipset, with support for the soon-come high definition TV (HDTV).

Philip’s media PC is aimed at the living room/lounge, allowing punters to store and share photos, music and video in a single system. 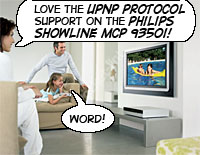 There are two integrated tuners onboard letting sofa-reclining types watch one channel while recording another on the 250 GB hard drive or to CD or DVD.

Philips’ Digital Natural Motion technology is employed to improve video quality and reduce stutter, with built in support for the UPnP protocol to allowing the unit to act as a media server for products in Philips’ Streamium range of media viewers.

The Philips Showline Media Center MCP9350i will be rolling out in Europe in October. Pricing is yet to be announced.