In a damning blow to the UK government’s love affair with identity cards, a British criminologist has warned that the new technology could actually increase, rather than solve, the problem of identity theft and fraud.

Dr Emily Finch, of the University of East Anglia in England said that identity cards and chip and pin technology for credit cards were unlikely to alleviate the problem, as fraudsters react with more creative responses.

Finch said that a growing dependence on technology was leading to a breakdown in individual vigilance, which remains the best protection against fraud and identity theft.

“There is a worrying assumption that advances in technology will provide the solution to identity theft whereas it is possible that they may actually aggravate the problem,” she told the British Association science conference.

As part of her research, Finch interviewed thieves, vagabonds, fraudsters and ne’er do wells and asked about the impact new technology may have on their nefarious activities.

Not surprisingly, she learned that fraudsters were tenacious blighters, who were ready and willing to change their methods to elude new security measures. 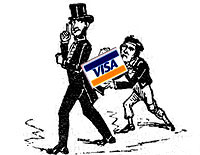 “Studying the way that individuals disclose sensitive information would be far more valuable in preventing identity fraud than the evolution of technologically advanced but ultimately fallible measures to prevent misuse of personal information after it has been obtained,” she added.

As we reported last month, a survey by Gallup revealed that almost a fifth of US consumers admitted falling victim to identity theft, although Finch said that there were sometimes less dodgy reasons for fraud and identify theft – sometimes people just wanted to start again with a new identity.

Focusing on the UK government’s proposed ID card scheme for its citizens, Finch said that the cards could potentially increase fraudulent behaviour,

“What fraudsters know about is human nature,” said Finch. “And they adapt to things like the Internet which provides an absolutely fantastic base to access personal information.”

Despite ministers insisting that national identity cards would counter terrorism, crime and illegal immigration, critics like the civil rights group liberty say that the scheme won’t tackle identity fraud, crime or any of the high-profile problems the Government has claimed they will address.

Finch also expressed doubts about chip and pin technology (which enables consumers to purchase goods by punching in a personal number rather than using a signature), saying that criminals may switch from watching an individual punch in the code and stealing the card, and just nabbing credit card application forms and getting new cards and numbers instead.