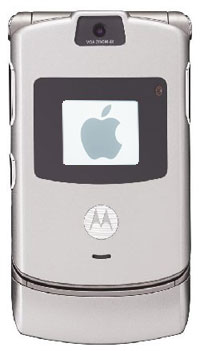 After enjoying huge success with the iPod, mini iPod and photo iPod, Apple are looking to score another hit with consumers with the expected announcement of the iPhone, a music playing mobile phone.

Speculation about the new product has been running rife after Apple announced a mystery San Francisco launch scheduled for next Wednesday with the teasing statement, “1,000 songs in your pocket changed everything. Here we go again.”

The New York Times reported that Roger Entner, a telecommunications analyst with research firm Ovum, had been briefed on the new phone and that it would be compatible with Apple’s iTunes software, declaring it “a deluxe music player now on your cellphone.”

The phone has taken longer than a one legged sloth to arrive, with the project dogged by delays while rivals Sony Ericsson and Nokia have gained ground with their own music-playing models handsets – Sony Ericsson’s recently launched W800i phone has already proved a hit and Nokia’s 1,000 song-capacity N series will be in shops by the end of the year.

Despite arriving late at the party, Apple are hopeful that the iPod brand will successfully translate into big sales amongst the world’s estimated 1 billion mobile phone users.

Thomas Husson, a mobile analyst with Jupiter Research, had some doubts: “It’s been awaited for a year, if not more. That means people might be disappointed, because I don’t think it will be much more than a phone that can play music – and there are already others on the market that can do that. But iTunes and iPod are quite famous now in the music space, and they will be hoping for leverage.”

Some analysts have also expressed concerns that the iPhone might cannibalise Apple’s own market and cut into sales of their low end players, while others suspect that mobile phone networks might refuse to carry the phone to protect their own music download services.

With Motorola’s history of announcing new products months ahead of launch and Apple’s traditional penchant for headline-grabbing, last-minute announcements, the launch might be an interesting one.