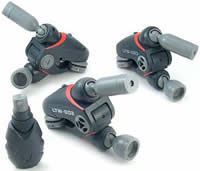 Fancy getting all very Mission-Impossible at home or round about? Concerned that you need to protect yourself against International terrorists, your elder brother or members of a rival spy gang?

Wild Planet, based in San Francisco, will be able to fulfil your paranoia/technology dreams with their Lazer Tripwire. From the product name, it’s not exactly surprising that it act as a tripwire, but uses a laser to do it.

Using a low-power beam of light that won’t burn you retina out even if you look directly into it (not a laser then), for detection, the three supplied devices clamp on to relevant surfaces. Each of these units has an angle-able transmit and receive heads, so lining them up creates an invisible barrier around whatever is inside. As you all know from the movies, breaking the beam will set of the alarm, alerting you to the intrusion. 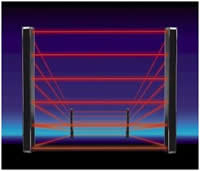 It’s an interesting adoption of technology that is used to protect really rather serious things, like armed fighter planes sitting on a runway and power stations, as Rayonet from UK company, Integrated Design, does.

Clearly devices like Rayonet are a little different in that they use infrared light and have a _little_ more sophistication in them, like the ability to ignore birds flying through the beam, but the Lazer Tripwire fundamentally uses the principles.

Michael Bystram of Integrated Design tells me that the initial ideas for Rayonet started 24 years ago, With a considerable step forward in intelligence around 8 years ago. Jump to now, and there’s a toy using the same principles.

The Lazer TripWire comes from Wild PLanet’s Spy Gear equipment range which, if I was in the process of going through childhood, I would been quite obsessed with getting hold of (frankly I’m pretty tempted now).