It seems that there’s a never ending supply of companies ready to shell out for surveys asking the most inane questions.

So, why do they do it? Simple marketing usually.

The surveys are invariably designed to highlight some supposed shortcoming or growing need for some service or product that the company commissioning the survey just happens to offer!

This latest piece of survey fluff comes from Critical Path who wanted to “research consumer attitudes about the use of email and, in particular, to gauge interest in the use of mobile email services.”

What they really wanted to do, of course, was to show investors and consumers that their product is going to be a soaraway success, and by releasing a populist survey hopefully pick up a bit of free publicity along the way (and we’ve fallen for it. Damn!)

So naturally, the survey – as hard hitting as a soft marshmallow on a bed of feathers – concludes that there’s a massive potential market for mobile email and – would you believe it – Critical Path have got just the product the market needs!

Shamelessly trying to garner a mention in the lifestyle press, their survey trots out some truly vacuous dross claiming that people would rather get emails from an ex-boyfriend or ex-girlfriend than their boss during their personal time. 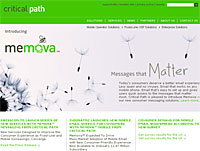 Plundering the depths of inanity further, the survey revealed that 34 per cent of females ranked spouse emails as the most important, and 10 per cent more blokes reckoned mobile email would make their lives easier. Fascinating.

The survey thoughtfully reminds us “how essential email communication has become in everyday life”, dazzling readers with the revelation that 88 per cent of their respondents check their email for messages from family and friends while on holiday.

Gesturing wildly at his own product box, Mike Serbinis, chief technology officer at Critical Path, claimed that consumers want “an affordable service that is easy to use, works on their current phone, and can deliver messages from their current email account.”

With a large “BUY NOW” sign flashing above his head, Serbinis continued, “Operators who offer a simple, affordable mobile email service that allows consumers to use their current phone and choose the messages that matter will reap the biggest rewards.”