Kodak has announced a new class of ‘advanced digital cameras’ aimed at grabbing a slice of the burgeoning dSLR market.

They won’t be winning any hearts on looks though, with their flagship EasyShare P880 model looking like this “a cross between Bender from Futurama and an ugly tank”.

Despite looking like it’s fallen off the Ugly Tree, the EasyShare P880 serves up an attractive feature set, offering an 8 megapixel sensor, a slew of enthusiast features and an unusually wide angle 24-140mm (35mm equiv) wide-angle f/2.8 – f/4.1 zoom lens made by Schneider-Kreuznach Variogon (try saying that after a few beers).

The one big advantage that compact digital cameras have over their dSLR counterparts is the ability to capture video footage, and Kodak have been keen to trumpet the camera’s movie making functions.

The P880 can capture VGA video at 30 frames per second (Motion JPEG compression) with zooming and lets users trim, cut, splice and merge clips on the camera and extract individual video frames as 640 x 480 JPEGs at 640 x 480 resolution. 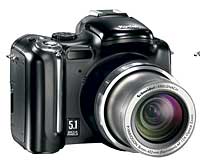 Sharing the same video capabilities as its upmarket brother, the 850 offers an advanced, hybrid AF system with 25 selectable points and shutter speeds from 1/2 – 1/1000.

There’s also a hotshoe for extended lighting control, the usual selection of preset scene modes with a live histogram, RAW/TIFF/JPEG support and a lithium ion battery.