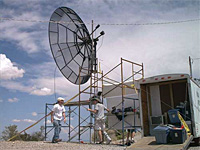 Those of you struggling to maintain a Wi-Fi connection from next door’s access point may be exclaiming a Victor Meldrew-style, “I don’t belieeeeve it!” at the news of a mighty new world record being set for an unamplified Wi-Fi link.

The new world record in the “unamplified” category was set last week by Team iFiber Redwire, with the Wi-Fi signal reaching an astonishing 125 miles, stretching from Las Vegas, Nevada, all the way to a spot adjacent to St. George, Utah.

The team of college students managed to crush the previous world record for the longest distance for an unamplified Wi-Fi link (55.1 miles @ 30mW) at the 3rd Annual Defcon Wifi Shootout Contest.

The team managed a full 11 Mbps data transfer rate over a distance of 125 miles, a new world record that may end up being recorded in the Guinness Book of World Records. 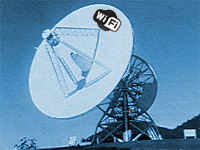 There is now talk of attempts to smash the current Bluetooth record of 1.08 miles.

Credit for first picture : thanks to wifi-shootout.com