Apple Computer has unveiled updates to its iBook laptop and Mac Mini lines, lobbing in new features, more memory and built in wireless technology – although the anticipated widescreen models failed to run up at the launch party.

Apple’s new iBook line now comes with a scrolling trackpad and a clever sudden motion sensor which helps protect a spinning hard drive if some clumsy klutz drops the notebook.

The enhanced range features the ATI Mobility Radeon 9550 with 32MB of dedicated video, with machines either offering a slot-load SuperDrive (for burning DVDs and CDs), or a slot-load Combo drive (for watching DVDs and burning CDs).

‘The new iBook is the perfect portable for the go anywhere, do anything digital lifestyle of consumers and students,” roared David Moody, Apple’s VP of Mac Product Marketing.

“With improved performance, double the memory, and new mobility features like the scrolling TrackPad, Sudden Motion Sensor and Bluetooth, the new iBooks are an amazing value,” he positively insisted. 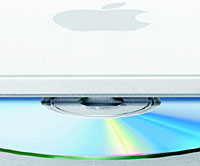 A further model offering DVD and CD burning capabilities via a SuperDrive will knock out for £499/US$699.

They may be pat-on-the-head teensy, but Mac Minis come stuffed with connectivity options, including one FireWire 400 and two USB 2.0 ports, DVI (supporting VGA), and built-in 10/100 BASE-T NIC.

“Mac Mini has been a popular choice for consumers getting started with Mac OS X and iLife ’05,” beamed Moody.

“With double the memory and new features like built-in wireless networking and DVD burning, the new Mac Mini delivers an even greater value in an innovative compact design,” he purred.