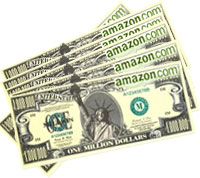 Amazon.com’s revenue soared internationally in the second quarter as electronics and other non-book bits’n’bobs made up more of its business.

The behemoth of online book floggers saw its sales of electronics and general merchandise grow to 26 per cent of its worldwide sales from 23 per cent a year earlier.

Szkutak said that the company was chuffed with the “heavy shopping” undertaken by Amazon Prime customers who have been clicking madly for electronics, tools, kitchen supplies, and health and personal care products.

“Though expensive for the company, Amazon Prime creates a premium experience for customers who join, and as a result we hope they’ll purchase more from us in the long term,” Szkutak said.

Amazon’s earnings were US$0.12 per share, slipping down from US$0.18 per share in last year’s second quarter, but still ahead of analyst’s predications.

Amazon said it expects sales to increase of 20 percent to 31 percent in the current quarter compared to last year.