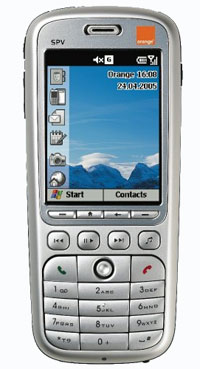 It’s been a long time coming, but Orange have finally announced that their Windows Mobile-powered SPV C550 smartphone will go on sale later this month

The “Orange SPV C550 Great for Music handset” – to give its full name – is a compact mobile offering full smartphone functionality and a digital music player, sporting dedicated play, rewind and fast-forward keys.

The player integrates with the Orange World portal where Orange are hoping punters will be tempted into shelling out for some of the 300,000 music tracks available for download.

Songs downloaded through the phone’s Music Player software are DRM-protected, although the built in Fireplayer application will let punters remix their fave tunes into ringtones.

Media playback times for the C550 weren’t announced, but Orange’s own figures put it at 4 hours of talk time and up to 6 days of standby time.

There’s an integrated 1.3 Megapixel camera wedged into its diminutive 108 x 46 x 16 mm case, and the whole caboodle weighs in at a pocket-unruffling 107g.

With the smartphone being built around Microsoft’s Windows Mobile 2003 platform, it’s easy to blast off emails on the move and synchronise contacts, diary and calendar information with your desktop PC.

Matthew Kirk, Director of Devices at Orange was ready and willing to spin out the PR schmooze: “Since the launch of the first SPV handset three years ago, Orange has led the development of smartphones and provided its customers with a choice of the latest and most powerful devices. The Orange SPV C500 was the world’s smallest smartphone and today its successor provides the first realistic alternative to carrying around a separate MP3 player, phone and PDA.”

Pricing details are yet to be announced, but will, as ever, be dependant on contract.