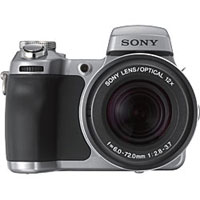 Unlike some of its more esoteric, all-swivelling zoom monsters like the F828 and F717, this one looks like a conventional SLR camera, with a flip-up flash on the top, traditional camera lines and a substantial handgrip.

It’s certainly quite a beefy fella compared to its direct competitors like the Panasonic Lumix DMC-FZ5, Konica Minolta Z5 and the Canon PowerShot S2 IS, but is still small and light enough to carry around all day.

The camera is powered by two AA batteries, which should be good for up to 300 shots. 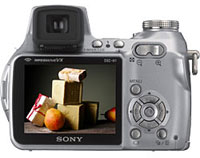 The DSC-H1 sports a fairly small but bright 115,200 pixels electronic viewfinder (EVF) that mirrors the information displayed on the main screen.

The main LCD screen is indeed a whopper, sporting a 2.5″ bright, crisp and lag-free display using Sony’s nifty hybrid technology, which features a reflective screen making it possible to see the screen in bright sunlight

The shutter release is exactly where it should be, with a clickable ‘jog dial’ below allowing mustard-keen photographers to tweak manual exposure, program shift and AE-compensation to their heart’s delight. Very SLR-like.

The main mode dial nearby provides access to a wide selection of preset, auto and manual exposure modes with further adjustments enabled through Sony’s tried and trusted main LCD interface.

Unlike many of Sony’s previous upmarket cameras, there’s no Carl Zeiss branded lens aboard, but the compact zoom covers a very useful 36-432mm range (12x optical) with a reasonably nippy F2.8 to F3.7 maximum aperture. 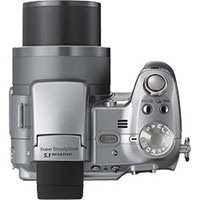 Shutter speeds range from 30 to 1/1000 second, and the camera comes with optical image stabilisation built in (although Sony likes to call it Super Steady Shot’).

Motion video can be recorded in the MPEG-VX Fine mode, capable of capturing full screen VGA (640 x 480) resolution at 30fps or 16fps with audio.

Sticking firmly to their guns, the camera uses Sony’s Memory Stick as the only expansion option, although there’s 32 meg of internal memory provided.

In our quick hands-on test, the camera seemed responsive and comfortable in the hand, with punchy, crisp images straight out of the camera. Keen photographers may be disappointed by the lack of RAW/TIFF support and the lack of zoom function while in movie mode is irritating. 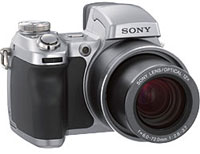 There’s enough manual controls to ensure that adventurous photographers can stay in control of their exposures, with a wide selection of scene modes covering most eventualities.

With a wealth of features served up in a near idiot-proof package, this is a great camera for both blundering amateurs and keen amateurs looking to capture high quality images with ease. Recommended.