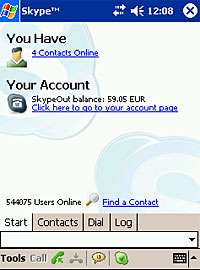 As you probably know, we’re big fans of the Internet-based telephony application Skype, and when we got our grubby hands on an imate JAM PocketPC phone (with SanDisk Wi-Fi card), we couldn’t wait to start reaping those free VoIP calls with Skype for Pocket PC, v1.1.0.6.

A quick visit to Skype’s website bagged the free 2.5 meg download, and told us that our machine was up to the job.

Skype recommends a rather beefy 400 MHz processor or above, so our JAM phone (also known as the T-Mobile MDA Compact) should be fine for the job with its sprightly 416 Mhz CPU.

Seeing as most PDA/smartphone users typically operate their devices in power saving modes running the processor significantly slower than top speed, there is a danger that Skype’s demanding CPU footprint may turn into something of a battery hog, so be warned

The interface will be very familiar to Skype PC users, offering a near-identical feature list, including chat messaging. Once logged in, your phone contacts appear as usual although we found the online notification a bit flaky, often failing to correctly indicate that friends were online. 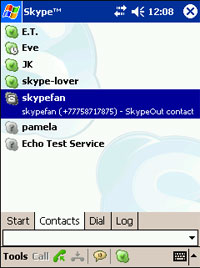 Using Skype to place voice calls to Skype users or via SkypeOut was simplicity itself, with almost all attempts to connect calls successful first time. Sadly, once connected, things weren’t quite so rosy.

My first call was encouraging; with the other person’s voice coming over reasonably clear with no problems their end either.

The second call, however, was a catastrophe, with a distorted, intermittent signal making me sound like Norman Collier doing an impression of the Daleks. It was unusable.

Other calls have resulted in recipients being subjected to buzzes, clicks, pops, complete silences or weird dub remixes of my voice, while I’ve been treated to random snippets of audio, whirring clicks and, in once case, words spoken some time previously coming back in a spooky loop.

At times, it was a bit like trying to communicate over a children’s walkie-talkie at the limits of its range or hearing disconnected voices through the fug of mind bending drugs. 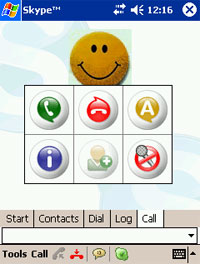 But I battled on, and found subsequent Skype calls to be a veritable potpourri of good, bad and indifferent, with more terrible calls than good ones.

In didn’t help that Skype defaulted to using the JAM’s speakerphone, making a headset essential for any kind of clarity (and privacy).

Although you can buy natty headsets with boom microphones that make you look like an Air Traffic Controller, I’ve yet to see a Pocket PC with a dedicated mic input, so you’ll still have to bark your words into the device’s integrated microphone.

For the greater part, the IM element of Skype worked fine, and if you’ve got a wide circle of chums using Skype, is worth the download alone.

With the fast growth of VoiP and Wi-Fi access, there’s no denying that the software has huge potential. 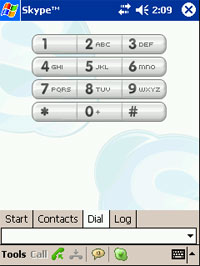 As we reported in March 2005, there’s free Skype access provided at hundreds of airports, railways stations etc through The Cloud’s network, which – in theory – means you could be ringing up associates worldwide for nowt.

But no business client is going to be impressed with a phone call full of buzzing noises, weird clicks with the caller sounding like Sparky the Magic Piano on a bad day.

Seeing as almost all of the problems encountered were specific to the PocketPC version, it’s hard to work out whether it’s the limitations of the platform holding back Skype, or that the software hasn’t matured yet.

The good news is that Skype for Pocket PC is a free download, so it’s definitely checking it out to see how it works on your device.

The company are aggressively developing the product, and with luck many of the issues we encountered may be resolved in the near future.

For now, we can only give it a mixed review. We love the technology and we – naturally – love the idea of free VoiP calls on a smartphone, but until calls become more reliable – and usable – we’ll be sticking to conventional networks for important calls.