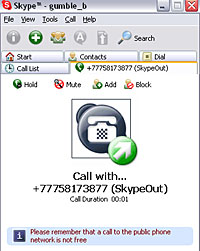 The new Skype Voicemail service allows callers to leave unlimited voicemail messages for Skype users when they are unavailable or offline.

Unlike bog-standard voicemail systems, Skype Voicemail also lets users send pre-recorded voice messages to other Skype users – even if they’re not a subscriber to the service.

The SkypeIn beta ran in eight countries, and testers in those countries can also receive Voicemail messages from ordinary fixed or mobile phones.

Users of the service can personalise their Skype Voicemail by setting their answer preferences, adding their own witty and kray-zee greeting and electing to receive messages up to 10 minutes long. 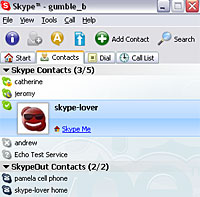 Skype for Windows also offers an “enhanced visual experience” (whatever that is) with streamlined user interfaces and improved upgrade and premium notices.

There are also some new animated emoticons which, apparently, give instant messages “more expression”. Or maybe just irritate people more.

All of the company’s premium services – Skype Voicemail, SkypeOut, and the beta version of SkypeIn – are compatible with the latest versions of Skype for Linux, Mac OS X, Pocket PC and Windows platforms.

In the last few days, Internet rumours have been rife about Skype being the subject of a possible merger, commercial partnership or buy-out by Yahoo. Nothing’s been confirmed – or denied – yet, but we’ll keep you posted!