Animated UK act, Gorillaz, are proudly claiming a world first for their ‘next generation’ enhanced video for ‘Feel Good Inc.’

Using new “template technology” brewed up by MTV and its partner Ensequence, the video for ‘Feel Good Inc’ utilises the technology’s modular capabilities which – apparently – allow “more in-depth, bespoke, multi-layered content to be added behind the red button.”

After consulting our buzzword translator, we’ve worked out that their next-gen video will allow viewers to call up more interactive content, including track info, competitions and artist biogs, as well as each band member’s audio commentary on the video.

“The new technology allows fans to get closer to their favourite artists and brings interactive content closer to the quality and choice found with the ‘extras’ on DVDs,” she added.

Bundling in a host of interactive freebies is clearly being seen as a useful marketing tool for record companies, keen to discover new ways to part loyal fans with their cash.

Matthew Kershaw, Head of Interactive, MTV Networks UK & Ireland, explains, “Offering greater flexibility, we now have the creative freedom to create bespoke interactive layers that complement each video and can be different depending on when the viewer accesses them, giving fans a far richer and more enhanced experience than they have had before”.

Elsewhere, the Gorillaz have confirmed details for an innovative virtual US tour, with unique performances being streamed via the Web sites of radio stations across the country.

The Demon Detour virtual tour starts on June 6 at KNDD Seattle’s 1077theend.com and will go on to ‘visit’ the sites of 39 US radio stations and include two national broadcasts. 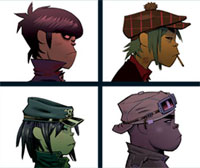 The band – brainchild of Blur’s Damon Albarn (aka 2D) and Tank Girl” creator Jamie Hewlett (aka Murdoc) – are already celebrating the US success of their second album, “Demon Days,” which has debuted at No. 6 on The Billboard 200.

“It’s not enough that we’ve just recorded and released the defining album of the century, now we’ve gotta go tell the world about it,” quipped. “We’re gonna play some live songs, maybe talk a little about the album, crack some jokes.”