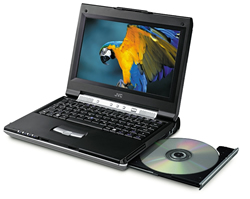 The JVC Mini Note (MP-XV841GB) is what’s known as a sub-notebook, but for such a small system it’s packed with features. What is immediately noticeable is the fantastic screen which is extremely bright and sharp and in a widescreen format (about 9 inches across diagonally) perfect for playing DVD’s on the move. The screen resolution is 1024 x 600.

It’s powered by a 1GHz Pentium processor (Centrino) with speed-step technology, so it slows down to save battery when you don’t need the processing power. Unfortunately the base system only comes with 256MB of memory which is just about enough to run Windows XP (Professional, which came with the unit), though another 512MB can be installed by the user by removing a few screws in the base and inserting and clipping in a single expansion card. 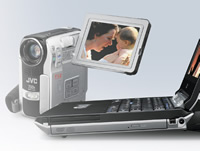 The internal drive plays DVD’s (and comes with WinDVD so you can watch them) and also writes CD’s (both CD-R and R/W). There’s 2 USB ports, an i.link (or IEEE-1394/Firewire) port, 10/100 Ethernet, a V.90 modem, microphone and line out jacks. The in-built microphone is OK for Internet chat type applications and the stereo speakers have a virtual surround sound. You can plug in an external monitor with a supplied adapter, there’s a PC Card slot and a slot for an SD memory card. Not forgetting the built-in WiFi for connecting to wireless networks or hotspots. The disk drive is 40GB split into a drive C: and D:

The docking station/port replicator which comes with is plugs into the same connector as the external monitor, giving you 4 USB ports, an Ethernet socket (LAN), standard VGA connector and an optical digital out so you can listen to your DVD’s through an external surround sound decoder. 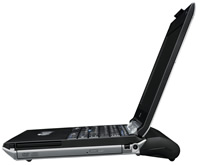 All work makes you a dull boy
The Mini Note is a full featured PC, though definitely aimed at the user on the move who wants to use the media friendly features – at a light weight. Unfortunately though usable, the keyboard is just too small to do real work and plugging in an external keyboard is definitely needed if you want to touch type (unless you have tiny fingers). The pointing device is a small nipple type in the keyboard and again is usable, though I didn’t find it particularly easy.

Summary
All in all it is a good system, the screen is one of the best out there, it’s got enough grunt to run most standard applications, but I found it too small to use as a desktop machine without external additions. For such a light and portable system it’s pretty usable for working on the move and watching DVD’s.