Despite the corporate wires buzzing with office gossips, chatting clerks, bored employees and downloading demons, a survey warns that IM remains unregulated in the workplace.

An online survey by YouGov, commissioned by security firm Akonix, has revealed that a quarter of users admitted to using Instant Messaging for office gossip, with another quarter admitting that they have used it to send something their boss wouldn’t approve of.

A further 16% have admitted to sending or receiving sensitive company information via IM.

Once the domain of hyperactive teens chatting incessantly online with their chums, IM has become one of the most widely deployed communications tools in corporations today with research firm Gartner predicting that the number of IM messages sent will outweigh the number of e-mail messages by 2006.

IM has grown hugely popular with users aged 18-29 years, with 80% of people in this age group saying they use it to blather away with friends and family at work.

Some 25% of particularly bored office workers have also used IM to download music and film trailers at work.

According to research firm Gartner, nearly three quarters of IM services are installed on to office PCs by employees sneakily downloading them for their own purposes.

Despite Bill Harmer, managing director of Akonix, warning of the risks of letting employees install software that has not been vetted by the IT bods, 62% of firms admitted to having no policy or technology in place to manage or block IM.

With most instant messaging in the workplace taking place over free, public IM networks, there is a danger that IM systems can open up dangerous security holes in a corporate network.

Public IM traffic is not encrypted, leaving it susceptible to ‘orrible hackers, identify spoofers and pesky packet-sniffers, increasing the possibility of networks becoming vulnerable to a wide variety of attacks. 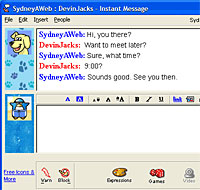 For example, anti-virus firm Symantec reported a 400 percent increase in IM and peer-to-peer (P2P) networking viruses, worms and trojans over the last 12 months.

Harmer noted that IM could bring big benefits to firms but it needed policies to regulate its use and technical solutions to ward off spammers and virus writers targeting IM.

“The findings of this survey should be a wake-up call to UK companies. IM should be embraced but protect your business adequately or the consequences can be severe,” finger-wagged Mr Harmer.

The YouGov survey found that in addition to its gossiping potential, IM can be an invaluable business tool for improving communications with customers or partners, gathering information or maintaining contacts.

Worryingly for many an office time-waster, Mr Harmer urged firms to archive all IM messages and be mindful of government regulations that demand that company data be stored for longer periods of time.

The survey was carried out by online pollsters YouGov with two thousand UK residents taking part.