It’s that time again, a new version of OS X has been released! For those that aren’t aware of OS X, it’s Apple’s operating system. As usual, OS 10.4 is named after a cat: 10.2 was named Jaguar, 10.3 Panther, and the new 10.4 has been titled Tiger.
OS X has been touted by some as uncrashable, and that is how I’ve found it too: After setting it up, I haven’t once restarted my computer despite having installed over 30 applications since. This stability is what makes Apple have such a following of fans, and would be unheard of on a Windows box.
There’s lots of new goodies in Tiger, but in this article I’ll focus on the addition of a search technology called Spotlight, which makes searching through files instantaneous. It also allows the creation of so-called search folders, with links to every file which matches that folder’s search criteria, which I detail lower down.
The clever bit, is that these search folders are self-updating, meaning that as soon as you start writing a document containing the word “banana”, the search folder that is told to look for this word, will find it and create a shortcut to it along with all the other files that contain the word.
This is the spotlight icon in the menubar

And type what it is that you are looking for. In my case, I typed ‘Summer’. 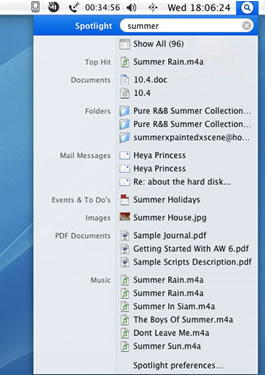 Within about one and a half seconds, the above menu appears. Clicking the top icon (Show All), shows a traditional window of all the results for the search. The second icon, labelled Top Hit, is the file that Mac OS X thinks is the most relevant to the search criteria.
The next section of search results lists folders with the word ‘Summer’ in their names. Pretty self-explanatory really.
Then email messages with the word ‘Summer’ in them are listed. The ability to index pretty much anything and then make it searchable is what’s so special about Spotlight.
The following one has items that Spotlight drew up from the calendar application I use.
Images, self-explanatory too.
PDF Documents are listed in the next section. Not many other search applications can index PDF files, but thanks to the tight integration of PDF with Mac OS X it is easily possible.
The last section contains music with the word ‘Summer’ in. Although not apparent here, Spotlight even searches the tags of MP3 and AAC files for words, meaning that if a song file was called, say, Winter but the artist in the tag of the file said ‘Summer’, it would still show up in the list of results.
Searchable folders, or “Smart” folders as Apple likes to call them, work similarly, but they are more use for things you often need to access and don’t want to keep typing into spotlight to find.
Click on the “file” option in the finder and then click on New Smart Folder. 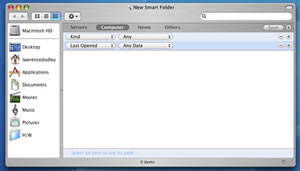 I typed “Summer” in the top right box as before. This instantly showed all the related files: 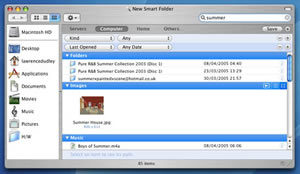 Next you just have to click on the red circle, the equivalent of the close window button in Windows. Finder asks you where you want to save the smart folder just created. I told it to just save it to the desktop as “Summer”:

Hit Save and the newly created smart folder appears on the desktop: 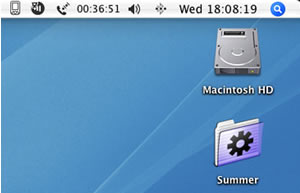 Apple are carrying out a pincher movement. Bit by bit, Apple are both removing reasons for Windows users not to switch to Mac, while adding tempting reasons to convert. This latest offering of OS X, in conjunction with less viruses on a Mac, and access to a powerful collection of digital media software (iPhoto, iTunes, GarageBand, iMovie, iDVD) should encourage Windows users to want an Apple computer. Let’s not forget that the next significant version of Windows, Longhorn, and its promised security and anti-virus features, are still likely to be more than a year away,
Overall, there are many more new features in Tiger, over 200 according to Apple. Having made the change from Windows myself, my suggestion is to spend some time with a Mac and experience it for yourself. You too might make the change.
For those wanting to buy a brand new Apple Mac, they can be purchased from Amazon (US|UK), and if you are a student or are otherwise involved in education, you can get a juicy education discount from Apple, so there’s really no excuse anymore!