Introduction
I’m no stranger to Bluetooth headsets, and the way this review is written reflects that: I’m not going to go through the whole look-no-wires thing over and over again as they do in adverts and will instead go into a little more detail about the headsets in question.

This review serves to compare and contrast the Jabra Freespeak 250 and Logitech’s Mobile Freedom.

My initial impression of the two headsets was quite different: The Logitech comes with less extra bits and pieces, and as everyone knows, it’s the details that make the difference. The content of the box include the headset itself; a charger that plugs directly into the headset; the manual; and some extra foam ear-covers.

The Jabra however adds a mains desktop charging dock and some exchangeable ear pieces of different sizes to suit various sizes of ears.

The Jabra desktop charger really comes in handy as it means less messy cables that you always have to lurch for and dig out of the back of the desk. Just slotting the headset into the charger makes life a lot easier.

Comfort
So, now to try each one on: The Logitech is a bit fiddly to get seated correctly, but once it’s fitted, it is very comfortable and even after extended use isn’t irritating. Sadly, the Jabra is quite another story: It goes on quite easily, but it feels quite heavy and the earpiece doesn’t actually insert into the ear properly as it was designed to. At least that was the case with my ear. So on comfort, the Logitech wins and rightly so; it’s almost undetectable if you fit it properly.

Operation
Pairing the headsets to a phone is quite similar in each case: All you have to do is hold the power button down for 10 seconds, search for the headset from the phone and then select it, enter the code 0000 as the passkey and then you’re done!

The phone that I performed these tests with was a Sony Ericsson P910i, but the experience should be similar whichever handset is used.

After the headsets were paired, I initiated a voice call from the handset to see if the headsets worked. While both took over the microphone and speaker from the phone just fine, the quality varied widely. Both had a slight hiss, the Jabra was an order of magnitude worse than the Logitech. The Jabra also had other quality issues, the worst of which was that the sound both in the speaker and that going through the microphone to the other party was choppy, not dissimilar to the way a normal mobile phone call gets when reception is poor. This problem varied in it’s intensity, but often got so bad I had to get the phone out of my pocket and use that instead. I did experiment with the distance that the phone and the headset were from each other, and the problem with the Jabra did increase with the distance it had to transmit. When the phone was <5cm from the phone the problem became almost unnoticeable, but if you have to hold your phone next to your head to use the headset then you might as well not bother with the headset. This is a fundamental flaw: What good is a headset, if its main purpose doesn't work satisfactorily? When you receive a call, the phone rings and at the same time an alert is sounded through the headset. Answering calls with the headsets is simple enough, or at least it should be because you just have to press one button. In the case of the Jabra, this button was located at the back of the ear, near the top. Not only did answering calls mess up my hair, it also looked stupid because I had to go looking behind my ear for the button. This is quite similar to the fact that the earpiece doesn't fit in the ear properly: It's a good idea, but it's designed terribly and clearly hasn't been properly thought out. 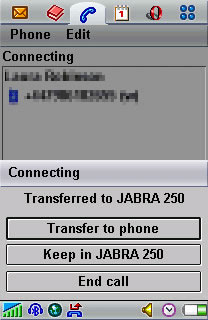 After some time, it is possible to become accustomed to the buttons, but nevertheless, technology should be intuitive, not require training. On the Logitech, this button is on the outside of the unit, and is easily accessible. Of course, pressing a button isn’t the only way to answer a call: It is also possible to simply say “answer”, if your phone supports this function, and this is one place where the Jabra is better than the Logitech: With the Logitech, the word answer has to be said quite loud, whereas with the Jabra, it can be muttered and the headset still recognises it. This is a big advantage as you, like me, will probably not want to stand there yelling “ANSWER!” at the top of your voice. It would just make you look stupid!

Both headsets have voice-dialing features, meaning that you press the afore-mentioned button, and then say the name of whomever it is you want to call. This feature works well on both headsets, but with the Jabra you have to find the button first, which as I mentioned earlier, is badly placed.

During a call, you can adjust the volume of the earpiece using buttons on the headset itself. The ones on the Jabra are, again, in an awkward place, although in this case it isn’t as bad as the answer button. The Logitech provides aural feedback to button-presses, which is a good thing, as sometimes it isn’t clear if you pressed a button or not and then you press it again in error. It also tells you when you have selected the maximum volume, meaning that you aren’t stuck hopelessly pressing a button to no avail. This feedback isn’t so loud that it is annoying though.

In terms of operation, the Logitech is a far better headset because of it not having any interference and because of the superior location of it’s buttons.

Battery Life
The battery lives below are according to the manufacturer. It is realistic to expect around half of the values below in a real-life situation.

This is one of the only areas where the Jabra beats the Logitech. In practice, you tend to be able to charge your headset at least once every 10 days or so unless you’re lost in a jungle or something though, so it’s not too much of an advantage. The extra hour of talk-time that the Jabra offers could definitely come in useful though.

Summary
Between the two, I far preferred the Logitech over the Jabra.

While the Jabra did look appealing, the sound quality and Bluetooth range were extremely poor, I found it difficult use and uncomfortable to wear.

The Logitech did have one problem and that was the need to yell voice-dial commands, but this flaw is small in comparison to the negative aspects of the Jabra Freespeak. The Logitech was very comfortable to wear, and the buttons were easy to access.