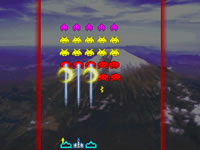 Everyone’s heard of Space Invaders haven’t they? Those who haven’t, will surely have been sitting in a very dark room with their fingers in their ears, singing “La, la, la, la” very loudly to themselves since 1978.

It’s a game with fantastical legends surrounding it, like the one about the Bank of Japan having to increase the circulation of 100-yen coins to cope with them sitting in Invader machines.

Since the original release, it’s been remade a quite a few times with varying success. Until now, the most recent release was the 25th Anniversary edition in 2003, where they went hell-for-leather releasing all sorts of branded goods as diverse as watches, bags, shoes and even cushions.

Not wanting to let a good thing go by, Nintendo has announced the latest version of Invaders – Space Invaders Revolution for the Nintendo DS.

The games original creator, Mr Tomohiro Nishikado, oversaw the development of the DS version at his development company, Dreams – how times have changed, he was originally responsible for creating the whole of the game.

It’s not just a copy of the original, Nishikado describes it accordingly, “With Space Invaders Revolution, I wanted the team to take the game back to its roots – whilst at the same time adding features which would appeal to modern gamers.” 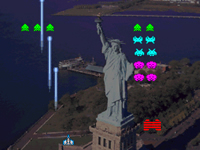 The new version sounds like it has some of those interesting features, such as rules that change as you pass between levels.

Of course, for fans of the original, there’s an exact duplicate, rewritten for the DS, not a version running the original code in an emulator as we assumed.

We’re pleased to report that some of the scoring strategies from the first version, work in Classic mode. The Nagoya-uchi (the “Nagoya attack”), or “death row” technique works perfectly (this is when the invaders have reached the very last row, just before the ground, the player’s base is immune to bullets from the bottom row of invaders). We can’t report the same for the 22 shots = 300 points from the UFO technique, as each attempt to date has lead to a loss of counting. 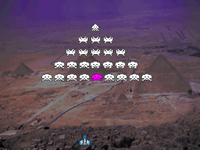 In normal play, the DS version doesn’t make a great use of the dual screens. You can use the lower, touch screen as a controller, tapping the on-screen buttons, in some of the games and sometimes graphics do pass between the two.

New Era Mode has plenty of challenges in it, as you fight your way through 60 levels, bringing in puzzle elements to the tried and tested formula.

It’s published by Rising Star Games with a license from Taito (the original developers) and will be available in the shops during Q2 this year.