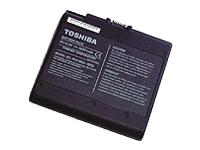 Toshiba has developed a super-fast Lithium-Ion battery capable of being charged to 80 per cent of its full capacity in under 60 seconds. According to the company, a full charge takes just “a few more minutes”.

Toshiba prototype ‘one-minute charge’ Li-ion battery can be recharged about 60 times faster than conventional lithium ion batteries, with the company claiming that the technology could be commercialised for portable electronics products in about three years.

Toshiba has developed two prototype batteries, with the smaller prototype (measuring 3.8mm by 62mm by 35mm) retaining 99 percent of its capacity after being charged 1,000 times, and the company are claiming that their fast-charging batteries will have about the same life as conventional rivals.

The company has been shouting about the new battery’s eco-credentials, pointing out that the fast recharging time will consume less energy than today’s Li-ion cells, leading to reduced carbon-dioxide emissions.

And, as they say on shampoo adverts, here’s the science: Toshiba clever technology uses “nano-particles” to “prevent organic liquid electrolytes from reducing during battery recharging. The nano-particles quickly absorb and store vast amount of lithium ions, without causing any deterioration in the electrode”.

Toshiba’s ‘miracle’ battery will come to market next year, the company said, initially in automotive and industrial applications.

Meanwhile, those crazy speed freaks at Toshiba have been busy making the earth go faster with an announcement that they have been sampling computer memory chips with the “world’s fastest data rate.”

The 512Mb XDR (extreme data rate) DRAM chips run at a turbo-charged speed of 4.8GHz, which is about 12 times faster than that of the memory typically found in today’s desktop PCs.

DRAM is the main type of memory used in PCs and servers. The faster the memory, the more smoothly computers tend to work with the increased speed offering better graphics and gaming performance.

Working at the 4.8GHz speed, the chips deliver a bandwidth of 12.8GBps, making them suitable for use in high-end digital TVs and PC graphics applications.

If more voltage is used, the chips can work at a peak operating speed of 6.4GHz, according to Toshiba.

XDR memory technology was developed by U.S.-based Rambus, with the chips incorporating Rambus’s ODR (octal data rate) signalling, which can transfer eight bits of data per clock cycle, according to Toshiba.

South Korea’s Samsung Electronics and Japan’s Elpida Memory have also licensed XDR technologies from Rambus, and both chip companies plan to go into mass production of 512Mb XDR chips in the second half of 2005.

Toshiba made it past the post first, with Kim Soo-Kyoum, program director for semiconductor research at market research company IDC commenting, “Yes, it looks like Toshiba’s is the first … and yes, it’s the fastest … but Samsung and Elpida have similar schedules.”

Adoption of XDR as a main memory in high-end computing will start during 2007, according to a December 2004 report by IDC.