History will be made in a small corner of Wales today when the residents of two Carmarthenshire villages – situated on either side of the River Tywi – switch to digital-only TV.

Around 450 households in Ferryside and Llanstephan will become the only areas in Europe with digital-only TV signals (along with slightly more glamorous Berlin).

Closing down the analogue television transmissions marks a milestone for the government in its quest to install digital TV in every British home.

The government is keenly perusing its pledge to switch off the analogue TV signal and replace it with digital by 2008 in Wales.

A provisional timetable for the UK-wide switchover has earmarked ITV’s Border region – covering south-west Scotland and Cumbria – as the first to lose its analogue signal in 2008.

The government has said switching to digital would provide a major one-off boost for the UK economy, leaving Chancellor Gordon Brown free to flog off the lucrative old analogue frequencies to telecom companies.

The west Wales households agreed to run trials with the digital set-top boxes when digital transmissions in the area began last November. Each house was given digital receivers for each of their televisions. 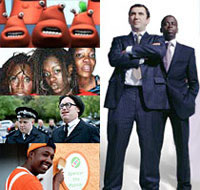 To help smooth the transition, a helpline was set up for residents’ teething problems, with one-to-one support made available to the elderly.

Project director Emyr Byron Hughes said residents had taken to digital because it provided more services, commenting: “It is such a leap forward even with the basic digital service, they have just taken to it.”

The trial had been run to discover how people coped with the new digital equipment and to learn from any technical problems experienced in the switchover.

Officials from the Department for Culture, Media and Sport, and the Department of Trade and Industry, joint co-ordinators of the project, seemed well chuffed with the progress so far, with Stella Thomas, one of the project team members, adding: “People have been more open to change than perhaps we have given them credit for in rural areas.”

There are concerns, however, that these fancy-pants new digi-boxes could be a problem for the elderly and those on poor incomes. The government is discussing with charities about how to protect the vulnerable while promising not to authorise a complete switchover until support measures are in place.

The trial results come on the day that Ofcom publishes its Digital Television Update for the fourth quarter of 2004, examining the latest data provided by the main digital television platform providers.