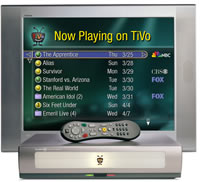 Squeezed on both sides by ever-competitive satellite and cable providers, TiVo is trying to woo third party developers into creating compelling new add-on services for their product.

The company has rolled out a Software Development Kit (SDK) in the hope that it will create a vibrant market in application for the TiVo. The SDK has been released on to SourceForge, a home for open-source software.

To stimulate the market, they’ve got the ball rolling with three initial add-ons: a weather information plug in, an RSS reader and a game, with users needing a Series 2 TiVo, a home network and broadband connection to take full advantage of the applications.

The move is part of a larger strategy, code-named Tahiti, which lets DVRs download information and content from the Internet. Howard Look, who regales under the magnificent title of ‘vice president of application and user experience’ at TiVo was heard excitedly exclaiming, “All the great ideas don’t have to come just from us.”

Some users may feel that there haven’t been enough great ideas coming from anywhere recently.

Although TiVo boxes are well regarded for their easy-peasy interface and excellent aesthetics, many feel that it’s being left behind by newer technologies. Sales haven’t matched expectations (only 2 million boxes so far) with the company racking up truly eye-wateringly large net losses (half a billion according to Om Malik).

Clearly something hugely impressive has to be pulled out of the bag to turn the company around, but posters on Slashdot weren’t exactly overwhelmed by TiVo’s announcement, but then Slashdotters are rarely overwhelmed.

If they’re represeantative, it seems that what many users really want – instant commercial skip, sharing recorded programs with other devices and free channel guide services – isn’t on TiVo’s horizon and barely anyone seemed excited by the somewhat less enticing prospect of bolt-on weather forecasts and an RSS reader.

TiVo does have a very enthusastic base of owners, many of whom are capable of developing software, so this could be a very wise move for TiVo. We wait with bated breath to see how many applications arrive.