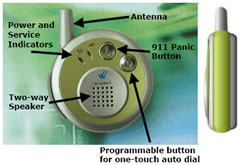 Wherify Wireless, based in Redwood Shores California, have announced what they claim is the smallest device to contain a GPS receiver and CDMA mobile phone. It has been specifically designed to help locate people carrying it. It is very compact (48mm x 12mm), light (45 grams) and simple to use, with only two buttons to operate. One button directly alerts the emergency services, 911, giving them the location within a few feet and ability to have a conversation with owner. The second button carries out the same function but to a user programmable phone number.

The rather grandly named GPS Universal Locator is rechargeable and power should last around 70 hours or 40 locates. To conserve battery, the GPS is not enabled until a location query is activated.

Wherify expect it to be available to consumers late second quarter 2004 and it is expected to retail for less than $150 with month subscription to the service at $19-$44 a month.

A similar service, mapAmobile, was launched in the UK in August 2003, but mapAmobile worked with a standard mobile phone, rather than needing a separate device.