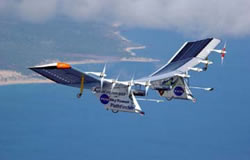 A new European Union funded research project, called CAPANINA, was started in November 2003 to investigate the viability of providing broadband coverage to rural areas using High Altitude Platforms (HAPs). HAPs are solar-powered airships or planes that fly between 17 – 22 km above the earth, higher than normal plane flight but below satellites.

CAPANINA is an example of what is being called Stratospheric Broadband and is aimed at bringing access speeds of up to 120Mbp/s to static small office and home users as well as mobile users, such as those on trains. Mobile users will use “smart” antennas that will point themselves at the HAP.

The three year, €5.6M project is lead by Dr David Grace at the University of York, hopes to deliver broadband inexpensively and explore issues such as fast propagation of content and resource management.

This reminds us of TeleDesic, the joint venture between Bill Gates and US cellular billionaire, Craig McCaw, that was a buzz in the Internet boom. They planned a constellation of hundreds of low-earth-orbit satellites (LEOS) flying less than 1,000 miles above the Earth, beaming broadband joy to the earth below. Looking at the TeleDesic site, the idea is clearly on the back burner, there are no working links on the site and the copyright is dated 2002 and we all know how keen Bill is on copyright.