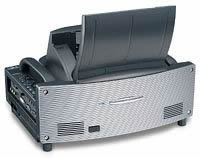 A while back NEC took note of these and produced a DLP (Digital Light Processor) projector that takes a different approach. The WT600 is a short-throw projector that, unlike other projectors, uses four aspheric (convex) mirrors. This means it can be placed as close as 2.5 inches from its screen, and still produce a 40″ image. Placing it 26″ away results in a 100″ image. It can be placed in front of or behind the screen, on the floor or the ceiling and can run as quietly as <32dB. This week they've installed a number of them for an exhibition called Ecce Homology at the Fowler Museum at UCLA as, due to the restricted space available and the need for the viewers to interact with the projected graphics, no other projector could fit the bill. A really interesting feature is provided by some of the software, called ImageExpress, that ships with it and other projectors in the NEC range. It enables a number of computers/laptops to switch between projecting what is displayed on their screens on to the projected screen, either using an Ethernet cable or wirelessly using 802.11b. Great news when a number people bring content to a meeting that they want to share with everyone, such as a group friend showing holiday photos. The 13-lb., 1500 ANSI lumen, XGA resolution DLP projector currently retailing for just under $7,000 (~£4,150), placing it in the same price range as plasma displays. NEC WT600 specification

Ecce Homology at the Fowler Museum at UCLA