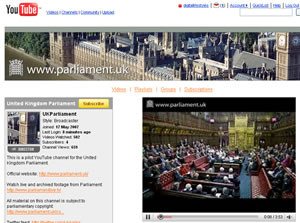 The UK House of Lords, is to launch it’s own YouTube channel.

Previously seen by some as a stuffy, rather stiff institution, it seems like the House of Lords , or The Lords as it’s normally abbreviated to, is trying to update it’s image and become more accessible to the people. All good stuff that should be supported.

END_OF_DOCUMENT_TOKEN_TO_BE_REPLACED

With rumours of a possible election in the UK, we wonder if there’s a co-incidence that one of the Labour parties media strategist has launched a Web site called CampaignTV.org, whose major focus is on politics.

Don’t expect too much balance in the politics on offer, but they’re not hiding that away either. In their words, “CampaignTV is the first free to view, independently-owned Labour-supporting internet TV channel.” That’s fair enough, as there’s plenty of pro-Conservative Web site around.
END_OF_DOCUMENT_TOKEN_TO_BE_REPLACED