Now that the Government has hit the ‘go’ button for switchover there are plenty of people anxious to know how the released spectrum will be used – and thereby how we will realise the value of it for UK plc.

In an attempt to address this issue Ofcom announced today the beginning of the Digital Dividend Review (DDR) – the project which will examine the options arising from the release of spectrum afforded by the digital switchover programme.

Ofcom estimates that the digital switchover programme will release up to 112 MHz of spectrum in the UHF (Ultra High Frequency) band for new uses. The UHF band is prime spectrum, because it offers a technically valuable combination of capacity (bandwidth) and range.

The Digital Dividend could enable the launch of a wide range of different services. Ofcom’s examples include:

Ofcom point out that this is not an exhaustive list – which will please HM Treasury since the greater the potential uses and users the higher the value likely to be realised from auctioning it.

On this point, Ofcom have a tricky job since they will have to ensure that there is enough incentive to investing the development of a particular wireless technology with no guarantee of it actually securing an allocation of the spectrum required – however it should be noted that Ofcom have stated that they will also begin work on a new auction design, with a view to ensuring that the spectrum is acquired by users who are likely to make best use of it – (i.e. best use = greatest value) – not sure how HMT will view this.

This approach means Ofcom will:

The proposed timetable for DDR is:

In her speech to the Royal Television Society in Cambridge this evening, Rt. Hon. Tessa Jowell confirmed digital switchover and outlined the timetable for switching by region.

Digital switchover will happen between 2008 and 2012 by ITV region in the following order:

Jowell also reiterated the Government’s pledge that digital switchover will be platform neutral. As reported earlier on OW, SwitchCo, which will be renamed ‘DigitalUK’ will launch tomorrow, and will oversee the switchover process, marketing and neutrality.

Jowell also outlined a programme to help vulnerable consumers. Households with one person over 75 and those with one person receiving disability allowances will be eligible for help and subsidy. The assistance scheme will be funded by the BBC through the licence fee (which is therefore obviously secure despite not Bill yet being in place).

It remains to be seen whether the BBC will be limited in how it promotes technologies in which it has a vested interest like DTT (Freeview) to these households.

Comment – It is interesting that London will be switched in 2012. Same year as we host the Olympics.

It is also worth noting the name change of SwitchCo to DigitalUK. This suggests a role beyond digital television, with the organisation being ambitious in its aims and looking to embed the most sophisicated digital technologies at the core of the home. Only by taking this approach will switchover be genuinely enabling for citizens, narrowing rather than extending the digital divide.

There’s been quite a lot of talk in the UK media about SwitchCo, the organisation tasked with switching from Analogue to Digital TV in the UK. Luke Gibbs of OfcomWatch wonders if it will come to life this week?

It seems as though digital switchover has been going on for ages. And yet it hasn’t even begun – it’s just been a load of people talking about it!

Despite the Government announcing the creation of SwitchCo earlier in the year no-one has heard anything since. The only things we know for sure are that Barry Cox is the Chairman and some bloke called Ford Ennals is the Chief Executive. No website, no contact details, nothing – the proverbial blank screen. Perhaps it’s a precursor for what’s to come in 2012!

[ed. – an extremely limited site does seem to have emerged today!]

Now, it’s possible that Labour will renege on its pledge. It’s certainly been known before for political parties to come into Government and do a spot of backtracking. Could this happen with switchover?

Well, later this week we may get some answers. On Thursday evening Secretary of State for Culture, Media and Sport, Rt Hon Tessa Jowell, MP, will make the keynote to the Royal Television Society’s bi-annual conference in Cambridge. As if Jowell hasn’t got enough high profile issues on her plate – licensing, Olympics, gambling – she also has digital switchover.

It is likely that in her keynote will offer a clearer vision of how switchover will take place and what SwitchCo’s role will be in making it happen.

After outlining the process it makes sense for SwitchCo to launch in earnest, publishing the technical and marketing plans for switchover. Will they be what the world has been waiting for?

From a technical perspective switchover it is not going to be a walk in the park. A phased switchover to digital by geographical area between 2008 and 2012. And we’ll only know how many people might be unable to get digital television once the analogue signal has been turned off and the digital signal boosted.

The technicalities of switchover will be critical to acheiving it. However, the marketing plan will also be essential to its success. Bringing the two strands together will be no easy task.

A successful switch to digital will release swathes of spectrum for re-allocation. But switchover also provides an opportunity to embed digital technology in the core of people’s homes – digital television is fundamental to acheiving the long envisaged, much touted Digital Britain.

So SwitchCo needs to be more ambitious in its aims than just pushing people to takeup digtial television. Digital television is just the beginning of digital enablement not the end of it.

There may be temptation to promote Digital Terrestrial Television (DTT) services such as Freeview over other digital services such as cable (D-Cab) or satellite (D-Sat) because it provides a low cost, convenient method of switching to digital television. However, it is also limiting as a digital technology, providing a few extra television channels and a low level of interactivity. Freeview might allow us to meet the proposed 2012 target but by then it will be out-moded.

It has already been stated that when SwitchCo does launch that it will take a platform neutral approach. So maybe we shouldn’t worry. However, switchover has the potential to become a political nightmare – and if it does there maybe a temptation to take the easiest possible route.

I am certainly not the first person to have pointed these things out. But I thought it was worth re-iterating ahead of various announcements this week, when potentially we will see an important new organisation emerge.

Luke Gibbs of OfcomWatch is nestled in at Edinburgh Television Festival – listening, watching, reporting, and we suspect sipping the odd cocktail at the TV exec love-in.

Most of Lord Birt’s speech in Edinburgh was numbingly dull – a long list of his own achievements, all of which had made UK television the best in the world. Indeed, the industry has seemingly only hit the dumbing down buffers since he went off to tinker with various policy train sets at Number 10. 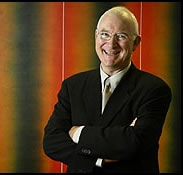 However, he did manage to mention a couple of issues which aren’t directly about himself. For example, he said the following in regard to EPG’s, searching and the gateways to information – this is already a fundamental issue for regulators and one where we all need to pay close attention as to how they look to regulate…

“…there will be taxing new issues for the regulators. The electronic programme guides that currently help us navigate the multi-channel universe are not even currently fit-for-purpose and will be antediluvian in an on-demand world. Compare the current generation of slow, clunky television EPGs with Google. If I want to know which live football matches are on TV tonight I have to embark on a slow, manual search through multiple channels. With Google I can find a needle in a haystack in less than a second – the fruits of a search of literally billions of items.

So time to think again about not only the nature of the search and navigation gateway into the television digital universe, but who should control it? How can we ensure a level playing field for all programme and service providers? Should regulators encourage competing search and navigation systems in the television domain? How will the viewer find ready access to the public service offerings?”