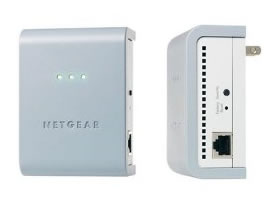 Simple installation
Installing the adapters is a simple matter of plugging them into a wall socket (they shouldn’t be plugged into extension leads) and that’s pretty much it.

The units “find” each other and if say you plug a DSL router into one and a PC into the other, it “just works” and the PC connects to the router as though they were directly connected by an Ethernet cable. The Powerline units are completely transparent. Neato.

Netgear’s XAV range are Homeplug AV compliant which means they support 200Mb/s (wirespeed theoretical maximum) and it is possible to stream video and other high bandwidth applications without loss of quality.

Snoop your neighbours data
Out the box the units don’t encrypt, but the adapters can be configured to support AES encryption so that all data sent across the network is encrypted, so even if someone else in the building (or your neighbours) plug in some powerline kit, they would need to know your encryption keys to steal your data – giving you peace of mind.

Simplicity is the key
The system really is plug and play and just works out of the box. Powerline is particularly useful where broadband comes into a house in one room, but the computers are in another, no messy cables running along the skirting board, or dangling behind bits of furniture. It really is a case of putting a powerline adapter where the connectivity is needed and then forgetting about it.

The only drawback is the flashing lights on the side of the unit to indicate activity, so positioning a unit right next to a TV might be slightly distracting. This can also be cured with the careful addition of thick sticky tape.

The Future
The technology behind powerline is constantly improving, the next generation of silicon will support 400Mb/s and up to 64 nodes in a mesh.

A subsequent generation is planned to support 800Mb/s (which is already being put on to silicon).

Though CAT5 or even CAT6 Ethernet will always support greater speeds, factoring in the cost to cable a house (i.e. a refit) there’s not really any competition (a “standard” 3 bed house can cost up to £20,000 to flood wire).

Costs
The costs vary from £85 to over £150, so we’d recommend shopping around for the two unit kit.

Summary
Pros
Incredibly easy to install, really are plug-and-play in the true sense.

Cons
Flashing lights may annoy and no Mac software to configure the units.