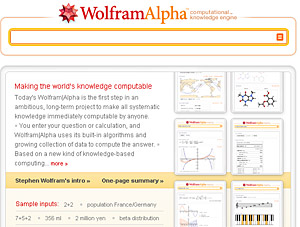 A new search engine said to be a “significant rival” to web giant Google is now online and offering a new way to access information.

Described as a “computation knowledge engine” rather than an ‘umble search engine, Wolfram Alpha is the work of British-born physicist Stephen Wolfram, who hopes his revolutionary products will change the way people use online data.

Unlike regular search engines, Wolfram Alpha gives direct, fact-stuffed answers to queries rather than presenting a long list of links to other sites – so typing in ‘Cardiff’ would instantly give you the city’s population, location, current time and weather, elevation and lists of nearby large cities by distance, direction and population.

Similarly, typing in ‘gold’ produces a comprehensive set of results listing everything you could possibly want to know about the stuff from its melting point, atomic properties, density, periodic table location to its current commodity type, plus a whole load of stuff thickos like us have never hear of, like electronegativity, human abundance and ‘phase at STP.’ Thankfully, it doesn’t mention the Spandau Ballet song too.

Using 10,000 CPUs spread across five data centres, Wolfram Alpha can rustle up veritable fact feasts in a jiffy, or generate new information (such as the latest figures for a nation’s GDP), as well as handling complicated mathematical queries, plot statistics and charts of natural events.

The site works by grabbing data from databases and rustling through feeds of relevant information to produce comprehensive, answer-stuffed pages which seemed to get us to the information far quicker than Google. 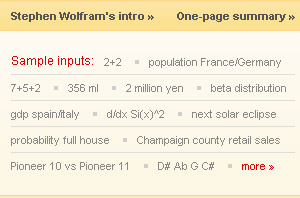 Saying that, it currently fails miserably as an all purpose search engine; type in ‘Radiohead’ and you’ll just get: “Music Performers. Development of this topic is under investigation…”

It’s the same story for the sport of the Gods, football too, although, disappointingly, there’s information about lesser sports such as Baseball and the American National Football League already online.

Dr Wolfram has said that the goal of the search engine was to make expert knowledge accessible to “anyone, anywhere, anytime”, and as soon as he manages to fit Cardiff City’s glittering array of home defeats, failed promotion attempts, humbling cup losses and the occasional triumphant win onto the database, we’ll be sold.

As it is, Wolfram Alpha already looks a powerful resource for stat-hunters, academics and cheating pub quiz contestants, and is certainly worth a look. File under: “one to watch.”

Wolfram|Alpha
Interesting look at how the technology works: How the hell does Wolfram Alpha work?