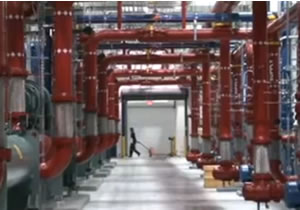 Google has, for most of its life, been obsessed with keeping details of its server secret.

Their long-fabled server design, seen by many as one of the central reasons for the success, certainly wasn’t ever detailed.

All of sudden that appears to be changing and it’s making interesting reading.

It’s been known for a long time, that the speed of Google’s search results is down to them having a huge number of server.

The exact number has been kept secret. In a visit I made to the original Googleplex way back in 2002, all that was loosely spoken about was around 30,000 servers – an almost inconceivable large number back then.

Today, they’ve got loads more than that. The exact number again isn’t known, but what we do now know is that their standard unit is now a 1 AAA container with 1,160 servers in each one. Industrial level hosting.

For the truly hard-core details, we’ve embedded some video below, but as a quick overview of what’s involved, have a look at this …

Why is Google revealing now?
It’s not really clear why Google would be doing this.

It may be that Google feel that they’re so far ahead that they’ve got nothing to fear from the competition.

One other theory is that this a defensive move from Google, trying to start to reply to concerns that they’re now moving in to ‘being evil.’ By sharing some of their intimate details, they’re less closed.