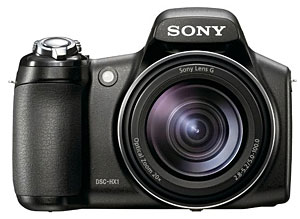 Sony has give their New Product Trumpet a lengthy parp to announce the arrival of its latest super-zoom camera, the Cyber-shot HX1.

The HX1 can whizz out a breakneck 10 frames per second or you can go berserk and capture up to 100 images at 2 fps.

The lens offers an impressive 20x optical zoom (28-560mm at f/2.8-5.2) and there’s two low-light shooting modes for both static and moving images, as well as manual controls for getting all creative on yo’ ass.

Unusually, Carl Zeiss seems to have left town for this camera, with the optics being a proprietary Sony G lens constructed of 13 elements in 10 groups. 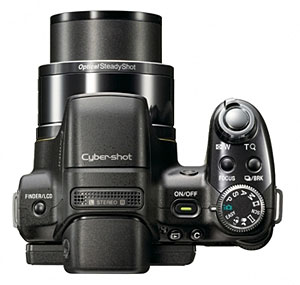 and a ‘Sweep Panorama’ feature which lets you stitch together multiple photos to make an extra-wide, high resolution image.

The HX1’s proprietary lithium-ion battery can keep you juiced up for for nearly 400 shots.

The HX1 isn’t exactly a looker, but it’s got everything you’ll need for around-town snapping, with a large 3-inch tilting LCD screen on the back, 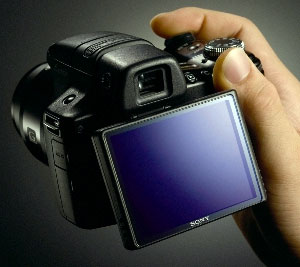 high-res electronic viewfinder and the option of shooting movies in 1080/30p HD with ‘crystal clear’ audio via the twin mics on the top of the camera.

Expect an April release date for the HX1, with a retail price of $499.