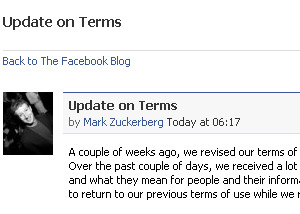 Brandishing virtual pitchforks, a user revolt against a new Terms of Service (TOS) agreement foisted on Facebook fans has seen the company perform a swift volte-face.

Faced with growing masses of outraged users and tenacious Twitterers – and with the thread of the Electronic Privacy Information Centre (EPIC) coming onboard – Facebook crumbled in the face of complaints that their updated terms equated to nothing more than, “We Can Do Anything We Want With Your Content. Forever.”

Facebook had changed a previous clause that meant that when you closed an account on their network, all rights to uploaded material would expire. When this was quietly changed to say that the company would be free to do what they like with the content for as long as they like – including flogging it off via sublicenses – all hell broke loose.

Facebook ‘umbled
In response, Facebook hastily plastered up blog posts on the topic, and ran a poll to see if users preferred the original ToS (the answer was a resounding ‘yes’).

Facebook CEO Mark Zuckerberg wrote in a blog that the old ToS was indeed being reintroduced:

Many of us at Facebook spent most of today discussing how best to move forward. One approach would have been to quickly amend the new terms with new language to clarify our positions further. Another approach was simply to revert to our old terms while we begin working on our next version. As we thought through this, we reached out to respected organizations to get their input.

Going forward, we’ve decided to take a new approach towards developing our terms. We concluded that returning to our previous terms was the right thing for now. As I said yesterday, we think that a lot of the language in our terms is overly formal and protective so we don’t plan to leave it there for long.

He also added that Facebook would be adopting a new set of terms that would take users’ rights further into consideration:

More than 175 million people use Facebook. If it were a country, it would be the sixth most populated country in the world. Our terms aren’t just a document that protect our rights; it’s the governing document for how the service is used by everyone across the world. Given its importance, we need to make sure the terms reflect the principles and values of the people using the service.

Our next version will be a substantial revision from where we are now. It will reflect the principles I described yesterday around how people share and control their information, and it will be written clearly in language everyone can understand. Since this will be the governing document that we’ll all live by, Facebook users will have a lot of input in crafting these terms. 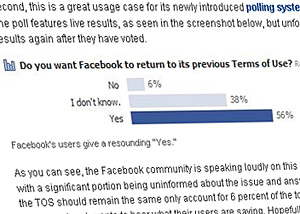 In a final bout of touchy-feeliness, Zuckerberg wrote, “If you’d like to get involved in crafting our new terms, you can start posting your questions, comments and requests in the group we’ve created – Facebook Bill of Rights and Responsibilities. I’m looking forward to reading your input.”