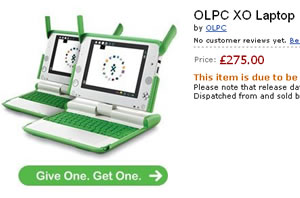 Europeans can now can legitimately order their own One Laptop Per Child (OLPC) XO Laptop.

The XO Laptop has been available for around a year in the US under two schemes – buying one to donate and Give One. Get One, which for double the price of a machine the purchaser would feel good for giving one away as well as receiving one themselves.

It’s the Give One. Get One. scheme that will be operating in Europe.

Orders are via Amazon and currently priced at £275 in the UK. The delivery is a rather shocking £50 on top of the price. We’re guessing that this high figure must including sending the Give One OLPC to its destination country as well as the one you get to keep.

Hands on with the OLPC XO
We were really excited to get our hands on an OLPC a short while ago (Thanks Andy Stanford-Clark!).

It’s smaller than we had thought after looking at endless photos of them online and we’re embarrassed to say that opening it had us fooled for a short while. Once you’ve done it once, it’s a breeze.

The machine was responsive and the software interface intuitive. The keyboard was sort-of-like a Sinclair spectrum, but we found no difficulty using it whatsoever. Andy tells us that the design of keyboard means that the keyboard can be submerged into water with no damage occurring.

Usable in strong sunlight
The screen has a great feature that beats most laptop screens hands down. When the sun is bright, you usually can’t see a darn things on your laptop. As the OLPC will be used in rather sunny countries all you have to do it reduced the backlight and it will work in any brightness of sun light.

It’s got really low power usage, so is Eco too.

Andy tells us that he’s found it a practice machine to use of a daily basis.

So, get yourself in gear. Give One. Get One.