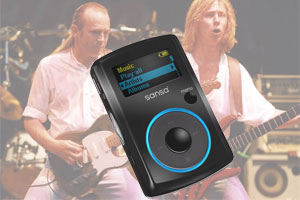 If you like your MP3 players small and reasonably priced and you don’t fancy signing up to the Apple Borg Collective, then Sandisk’s new 8GB Sansa Clip MP3 Player may be worth a look.

No less than 4,000 songs can be squeezed into this pint sized player, with Sansa claiming it’ll keep you rocking all over the world for 15 hours on its rechargeable battery – long enough to play songs again and again!

That player is so light at 0.9 ounces that it’ll probably fly in a paper plane, comes with a bright OLED colour screen and there’s also a built-in microphone for voice recording and a handy built-in FM tuner, with user presets. 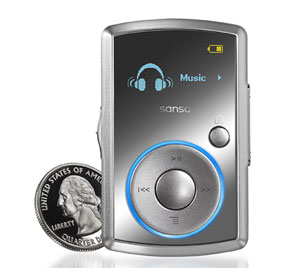 The player will happily grapple with MP3, WMA, WAV and Audible audio book formats, plus support for a host music download and subscription services, including Rhapsody To Go, Napster and eMusic, letting you listen to whatever you want.

It’s so small you could easily lose it down the dustpipe, so it comes with a (removable) built-in belt clip, ensuring it doesn’t go down down on the floor when you’re rock’n’rolling around the kitchen during margarita time.

The black 8GB Sansa Clip will in US stores from November 10th onwards for around $100 and comes with Windows software (Mac users can drag and drop over files).