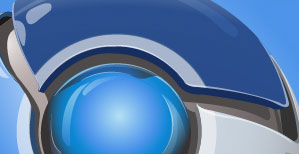 We’ve been loving the speedy operation of Google’s Chrome browser, but a few glitches – mainly to do with plug in support – have been holding us back from making it our number one browser.

The lack of an adblock plugin has been annoying us, and as power users we’re still preferring the power and flexibility offered by Firefox’s arsenal of plug ins and add ons.

Google has acknowledged that there’s been problems with Chrome’s support for plugins used to play videos and show PDFs and have just released a new releases which they claim is “packed with plugin fixes,” with early developer-channel users noting a dramatically improved plugin performance. 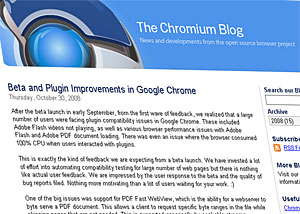 Your copy of Chrome should auto-update if you’re already using the browser, otherwise you can download it from here: www.google.com/chrome.

If you’re keen to keep up to date with developments on Google’s new browser, check out the Chromium Blog, which goes into some detail about bug fixes and new features.

Chrome: “an unprecedented threat to consumers”

Elsewhere, an American nonprofit consumer protection group is in a froth about Chrome, claiming that the program “poses an unprecedented threat to consumers.”

The Consumer Watchdog organisation insist that the problems are so bad that it, “could mark the end of real user control and choice online.”

The Watchdog says that they’re concerned that communications with Google are happening without users’ full understanding, consent or control.

They’re also unhappy about the blurring of the edges between local and cloud computing, and are well down on Chrome’s Incognito mode which they reckon “lulls consumers into a false sense of security that their actions are completely private and free from prying eyes when in fact they are not.”