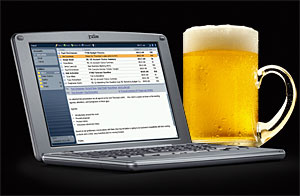 In the aftermath of the copious free beer and the sheer delight at seeing the Human League at the Palm Treo Pro launch earlier this week, we forgot to add that we crashed into the UK Palm rep at the end and attempted a Paxman-style merciless grilling in a quest for some hot insights into developments at Palm.

We delivered our first salvo of Fullers London Pride-fuelled questions, demanding news of Palm’s long overdue new operating system. “When will us long suffering Palm OS users have something to cheer about?” we insisted, prodding him in the lapel and adding a sad face in the hope that this might help him break company secrets.

The Palm rep looked sympathetic, but could only respond, “I’d love to tell you, but I can’t. But there’s good things coming soon…”

We pressed further. “What about Android?” “Why don’t Palm use that OS? Why try and introduce yet another OS?” 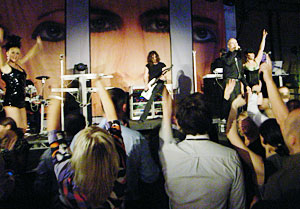 Again, the response was: “I’d love to tell you, but I can’t. But there’s good things coming soon…”

“Seeing as it’s all about the applications” we continued regardless, “how can Palm possibly hope to compete now that the iPhone and Android are the platforms getting developers excited?” (Actually, that’s what we thought we said. We suspect that it probably came out more like, “Sheeing ashitall aba th applictnz… hic…” etc etc.)

As he batted away our probing questions away with admirable professionalism, we tried to look deep into his soul. Perhaps the answers to our questions could be found in his eyes. They are, after all, said to be the windows to the soul. Perhaps some Palm secrets were lurking in his corneas? Maybe an inappropriate twitch may give away the release date of the new Nova Palm OS?

We looked hard into his peepers but could only see them shifting uneasily from side to side as he planned his escape from this over-enthusiastic, beer-dribbling hack.

The Foleo 2?
We brought up the Palm Foleo and told him how much we loved the pioneer netbook concept (we still do, actually) and felt that the company had scored a spectacular own goal by canceling it. We looked even deeper into his eyes and this time saw a spark of light. Ah-ha! Something was up! 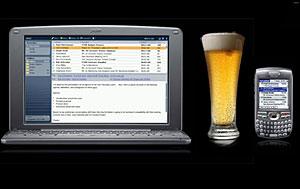 As we cranked our gaze into a full on stare, he admitted that he was very well acquainted with the Foleo and agreed with our opinion that it was a potentially great product. “But is there a Foleo2 in the wings?” we pushed.

Now, based on nothing more than our drunken analysis of how he responded – so it’s as scientific as Psychic Ron‘s football predictions – we got the impression that there is most definitely something brewing in this department. Or maybe we were thinking of the beer.

We pushed hard for more information but by this time the Palm rep had made his excuses and vanished into the ether.

Drunken waffle
So by now you may be thinking, “this is story is basically a whole load of waffle based on nothing more than a half recalled drunken conversation.” And you’d be right.

However, if it turns out to be true and a Foleo 2 is announced soon, then we’d like to take all the credit for leaking the story here, and if we’re wrong, we’d like you to forget all about it. It was just the beer talking.

*The name of the Palm rep has been withheld. We’ve probably forgotten who it was anyway, but he was a good sport, and his company sure know how to put on a good bash.

One thought on “Palm Foleo 2 On The Way? The Beer Asks The Questions”